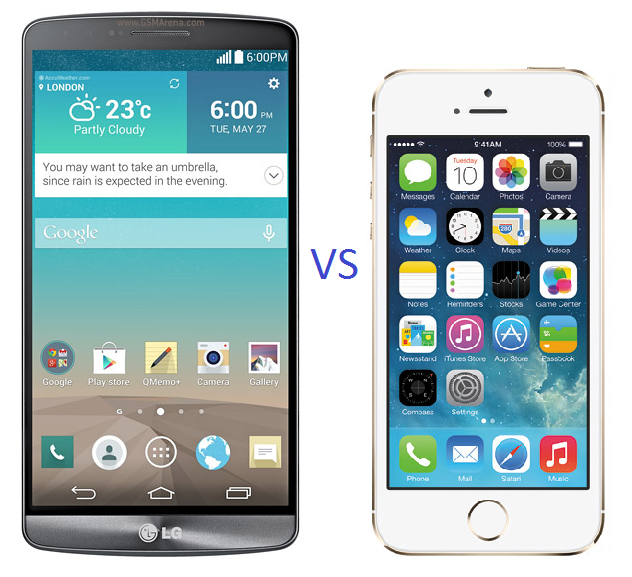 LG, a South Korean mobile giant, is coming with a stronger and bigger flagship of smartphone this 2014 in the name of LG G3, the upgraded brother of LG G2. However, Apple - another mobile phone manufacturer global giant is still sailing smoothly in the sea of smartphones with its Apple iPhone 5S.
Apple iPhone 5S is getting a year older this year, while LG G3 is still fresh in the market. While it is true that LG G3 is newer and younger, this does not automatically mean that iPhone 5S is already outdated. If you are torn between these two smartphones, here is a treat for you as we get them side by side.

Screen size
LG G3 sports a 5.5” Quad HD display with a 2560 x 1440 pixels. It also has a 538 ppi pixel density. On the other hand, iPhone 5S comes with a smaller screen size of 4” retina display. This is not a bad thing though, especially for people who have trouble grasping a bigger smartphone. iPhone 5S comes with a lower ppi of 326 and a 640 x 1136 pixels. Undoubtedly, iPhone 5s looks inferior in both screen quality and size next to LG G3.

Design
The iPhone 5S still remains at the apex of precision and metal engineering, it is one of those smartphones that feel incredibly premium and class in your hands. It sports an aluminium unibody. It is also incredibly lighter and thinner. It is also available in three classic colors – Space Gray, Gold, and Silver.
LG G3 also looks premium with its metal-effect skin. It is not actually metal, though. The rear cover is also removable. It is understood that it is heavier compared to iPhone 5S due to its enormous size. It also includes very tiny bezels and also comes in many colors - Metallic Black, Silk White, Shine Gold, Moon Violet, Burgundy Red. 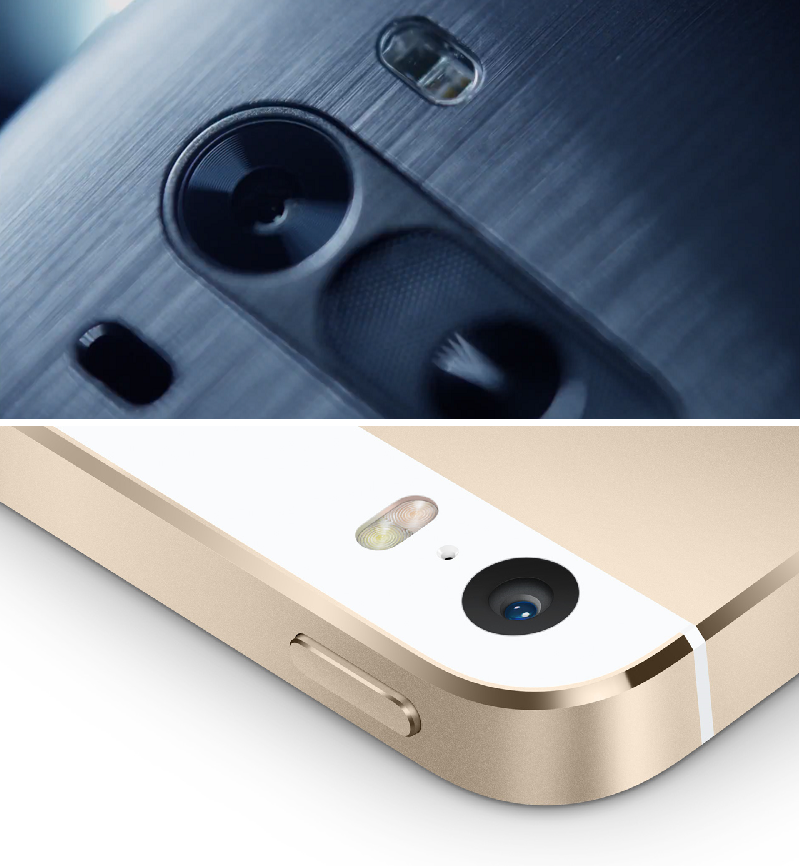 LG G3 boasts its 13MP rear camera powered with a Laser Auto Focus, which measures the distance of the subject using laser technology. This improves focus speed and object detection even in a low-light environment. It also comes with a Dual-LED flash. Its 2MP front camera is also great for selfies.
The Apple iPhone 5S sports an 8MP iSight camera with True Tone flash and dual. It also claims to have larger pixels and larger aperture, which are needed to get in more light. It also comes with the famous panorama mode and slow-motion video mode. However, if you want external hardware here, you can always improve the photo quality through various detachable camera lenses for iPhones. 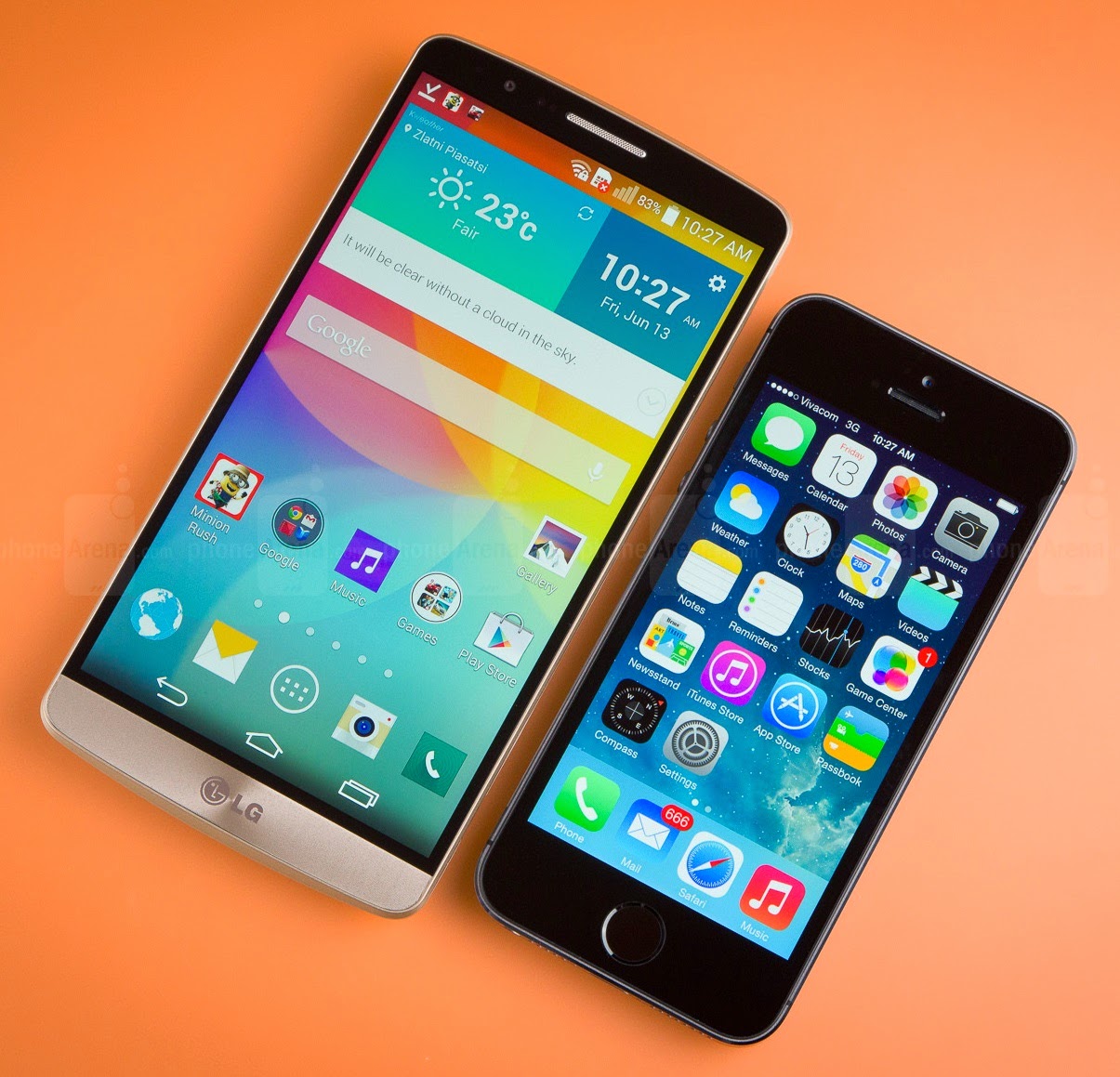 The iPhone 5S is the first 64-bit smartphone in the world, it’s a desktop-class architecture in a super slim iPhone. It can fire apps and allow you to multi-task seamlessly, thanks to its improved A7 chip. The A7 chip improves the CPU and GPU performance. It is coupled with an M7 coprocessor designed to measure motion data. This makes your battery even more efficient. It has 1.3 Dual-Core CPU with 1GB of RAM.
The iPhone 5S comes ready with an iOS 7. This user interface is more fluid, and simplicity is the name of its game. It comes with a reliable feature called Control Center.

LG G3 has its strong hardware and software too. LG G3 is equipped with Qualcomm Snapdragon 801 processor, clocked at 2.5GHz. It has 3GB of RAM for 32GB version, and 2GB for the standard 16GB version. Nominally-wise, the LG G3 is so much better!
LG G3 comes with the latest version of Android OS Kitkat. It is highly-customizable and intuitive.

Other Features
Personally, I am hoping that the iPhone has this Knock On feature to  wake up the phone, so you don’t have to press either the lock/unlock button and home button. Both smartphones have unique security features. The Apple iPhone 5S has its famous Fingerprint scanner while LG G3 has its Knock On code. Both are very efficient in protecting your phone from unwelcome users.

Battery
LG G3 comes with a massive 3,000 Mah battery, but it also comes with a larger screen which can drain the battery rapidly. It supports wireless charging and the battery is removable. The iPhone 5S has non-removable Li-Po 1560 mAh battery which is impressive enough.

Both handsets are great phones, like luxury smartphones with great specs. I also reckon they would also adopt new inventions for smartphones. While you are torn between the two, I must say that the choice is still personal. If you want simplicity and more premium fuels, the iPhone is for you, but if you are after a larger screen size and more processing power, definitely go with LG G3.
Posted by Unknown at 11:10 PM