A Smartphone Fit for a King

Ever since the smartphone market experienced a grand boom, a number of companies have tried to venture in manufacturing their own version of a smartphone. There are some companies that succeeded in making it big like Apple and Samsung, and there too are those which came to realize that this kind of industry is not their niche, but there are those that kept a steady pace, focusing more on the product itself, not on generating millions or billions in revenue.

Once example of companies that produces the top-quality mobile phones is Vertu. It is a British manufacturer and retailer of luxury mobile phones. The Vertu Constellation is the second Android device of the smartphone manufacturer, after the Ti. The Constellation is ingenuously like no other. It is crafted from the best quality materials there are. Its screen is a tough sapphire glass that is scratch-free. Plus, it is encased in genuine calf leather that fits on Grade 5 titanium body that is stronger and lighter than steel, which is used in the majority of smartphones. It comes in five different colors: black, dark brown, orange, light brown, and cherry. With an exterior like this, who needs a protective case? 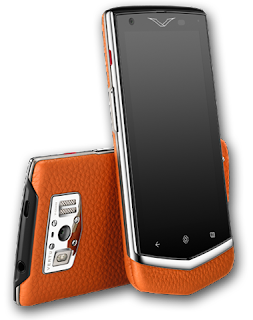 Massimiliano Pogliani, Vertu’s CEO, believes that less is more. He said, “In terms of design and appearance, it is being luxury but not to bling, too wild, too pushy, so I’m very happy and very confident.” The handheld device is handmade, making sure that it passes on the scrutiny and meticulous evaluation of the people who manufacture the device.

The Vertu Constellation comes with a slightly customized Android 4.2 OS, which runs on a 1.7GHz dual-core Snapdragon S4 SoC. It has a 4.3-inch 720p diagonal display, which is larger than the iPhone 5s but small enough to be classified as a phablet. A 13-megapixel back camera with dual LED flash and a 1.3-megapixel front camera are built in the Constellation to capture quality images. It is powered by a 1,800mAh battery, which is sad to say not enough to provide a long-lasting battery life. Good thing, the Constellation already utilizes the NFC technology, unlike the iPhone 5s. And last but not the least, the built-in storage capacity; it has a 32GB memory that is just enough for an average consumer and not for a download freak. You can get all these for ONLY €4,900 or $6630. Now, that’s a hefty price! This certainly isn’t a cheap mobile phone.

In terms of specs, it certainly can’t compete against the other flagship phones of top tech companies. Simply put, this handheld device may not capture the interest of the tech-savvy consumers out there. Rather, it caters more on the elite in order for them to showcase their extravagance through a mobile phone. This may not serve as a wise investment, but you’re sure to be a cut above the rest with this on hand.
Posted by Unknown at 8:06 PM