We can attest to the fact that none of these innovations that we take part of will be present without the internet. With it, access to information has been made convenient by just a click on your PC or tap on your tablet or smartphone. Let me ask you this: can you even imagine your life without access to the internet? I doubt.

Moving on, you and I are lucky enough that we have an access to the internet. However, some, as a matter of fact, take this privilege for granted. In reality, only a few people across the globe have an internet access. According to Google, “Two out of three people on earth don’t have access to the web.” It’s such an irony, considering the vast scope of the internet, yet access to it isn’t that widespread to this very day. There are quite a number of issues on why people on some parts of the world can’t be provided with internet access, and the biggest roadblock is due to geographical transmission issues. It’s either providers find it too impractical to establish a fiber-optic based internet to sparse population or land forms block wireless signals. 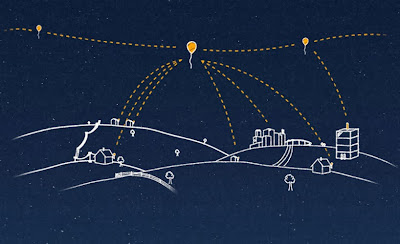 Good news because Google has a plan, and the solution lies on its “Project Loon.” The concept is actually simple yet clever; Google will be providing internet access by means of balloons. The project is made possible by sending out helium-filled balloons into the stratosphere, a layer of the atmosphere about 10 km above the earth’s surface. The altitude on where the balloons will stay is twice as high where airplanes fly; hence, cases of collision won’t be a problem. The winds are constant in the stratosphere ensuring that the balloons don’t roam about aimlessly to other areas or in space.

An array of solar panels will be attached below the balloon to power and charge the equipment. A wireless network will be established by the other balloons floating nearby in the stratosphere that will be connected to a base station on the ground, which is connected to the internet. People who want to connect to the balloon internet will just need to install a specialized Loon receiving antenna, and that’s about it. It can offer an internet connection of speeds up to the normal 3G internet or faster. Every balloon contains a parachute on top, which can be deployed for maintenance or if ever a repair is warranted.

And this we ask, “What does Google get in return for this extensive project?” Well, with more and more people being able to get connected, sooner or later, they will be clicking on the Google ads.

As of now, tests have already been conducted. Balloons have been deployed in certain areas in New Zealand, Africa, and California, USA. The first person in New Zealand to get access to the internet via Project Loon is a farmer. He is just one of the 50 locals in that area who signed up for the project they know so little of.

In this time when a lot of people are looking forward for the iPhone 5S to be available on the shelves of tech stores or listed on online mobile stores, a lot of people still don’t have an idea of what the internet is. This is just one of the evidences of the discrepancy of technology’s influence. And so, once this project realizes its full potential and operates in a full scale, more and more people will be joining us, having access to the internet and one another.
Posted by Unknown at 12:21 AM